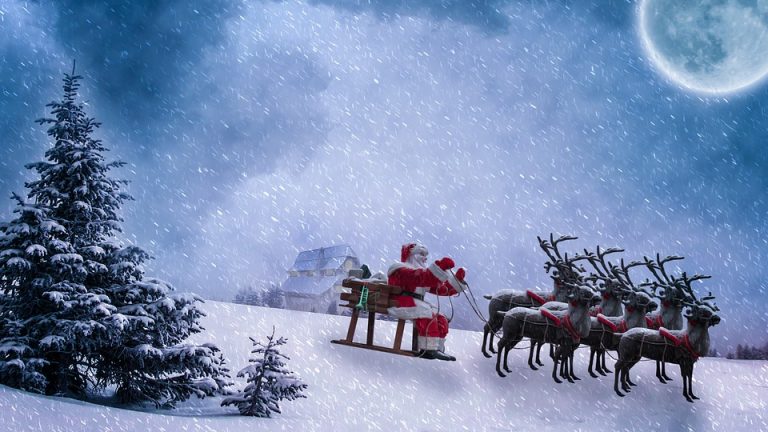 After all the preparations for Christmas Eve are done—naughty and nice distinguished, toys put together, gift wrapping beautifully made, candies to be given away gathered, Santa Claus’ sack all filled up—all that’s left is for Santa Claus to go house to house all over the world to deliver all those gifts. And he does it in just one night! There’s no other way he can accomplish this miraculous feat than with his reindeer. He gets everything all set in his sleigh; hitches the reindeer; and off he goes, flying through the Christmas Eve skies in his reindeer-powered ride.

We can’t help but be in awe at this group of Christmas cheer promoters at the North Pole, but at the same time, we may also be curious about them. One of the mysteries of their gift-giving exploit is how Santa Claus delivers all those gifts to kids around the world in just one night. So in this article, we will delve on the herd that makes it all possible and how they make it possible. But first, let us get to know all about this awesome bunch.

Santa Claus’ reindeer first came to be identified in a poem written by Clement Clarke Moore in the year, 1822, entitled, “A Visit from St. Nicholas”, otherwise, generally called, “The Night Before Christmas”. In a verse in the poem, it was mentioned how Santa Claus called out the names of all eight reindeer when they were out flying in the sky:

On, Comet! On Cupid! On, Donder and Blitzen!

Around the 20th century, came the ninth reindeer to Santa Claus’ herd, and his name is Rudolph. The story of Rudolph came out in a storybook that was written by Robert Lewis May for the department store, Montgomery Ward in the year, 1939. Although Rudolph was the newest addition to Santa Claus’ reindeer and the youngest among all of them, he came to be the most popular among them all, with his brightly glowing nose. His luminous nose earned him a spot in the front of all the reindeer during their flight every Christmas Eve to light their path in their travel, especially as it tends to be foggy in the winter night’s atmosphere.

Santa Claus’ reindeer also soon appeared or inspired several other works, such as comics; film; literature; music; and TV shows. Now that we know all their names, let us also get to know more about them their personalities.

With his trademark bursts of speed, Dasher is one of the fastest in the gang. This characteristic of his earned him the name, Dasher. Santa Claus also loves how his speediness comes in very handy for him, as he has to deliver all gifts in one night. Come Christmas Eve, he’s all ready to dash out through the Christmas Eve skies!

As the dancer in the gang, Dancer is very much passionate for dancing as she is passionate in her job of helping Santa Claus in delivering gifts to kids around the world with the rest of the reindeer. She is quite the entertainer with her moves. Santa Claus loves dancing with Dancer, as well as how she gracefully handles her job with ease.

Prancer is usually seen prancing around the North Pole with the elves, but when the time comes for flying, it’s pretty impressive how he kicks and speeds his way up in the air. His light-footedness is another asset to Santa Claus’ set of reindeer.

Given the name Vixen, which means female fox, Vixen is actually quite foxy. This playful reindeer has a lot of magic tricks in her sleeves and never fails to amuse. One particular trick that she’s really good at is making things appear and reappear. Although she may slightly be mischievous, as she sometimes tricks other reindeer for their sweets, her tricks also come in handy on Christmas Eve during times when there’s not much space through the chimney, while Santa Claus sack of toys is quite big.

Here is another reindeer that is one of the fastest in the squad, hence, his given name, Comet. Apart from that, this handsome reindeer serves as an inspiration to kids to be well-behaved. Often times, Santa Claus would take Comet with him when he checks on the kids. It’s his laid-back attitude and adorableness that makes him popular with the kids.

Donning Christmas reins decorated with red and green little heart-shaped bells and living by her motto, “Spread Love,” her given name, Cupid, surely suits her personality. On her own mission to also actualize her motto, she carries mistletoes with her and places them in people’s entryways during Christmastime to promote hugs; kisses; and love everywhere.

Donder’s name, which is of German origin, means thunder. It’s quite fitting for a reindeer who has a thunderous presence and a loud booming voice. Speaking of his voice, he’s another one of Santa Claus’ talented reindeer, as he is actually a great singer with his beautiful baritone voice. At times, he’d be blending in with his buddy, Blitzen in a duet.

Blitzen, whose name is also of German origin, which means lightning, is best buds with Donder. The duo is as compatible as their names imply—thunder and lightning. Also, he is fond of singing with Donder. Furthermore, as his name suggests, he is like a lightning bolt, not only with his speed as fast as lightning but also how he manages to electrically charge his fellow reindeer with his power of lightning when Santa Claus yells, “Faster!” It allows them to accelerate into the Christmas Eve skies as fast as the speed of lightning.

Rudolph, well-known for his luminous red nose, is the most popular among all of Santa Claus’ reindeer. Though growing up, he wasn’t always that popular. He used to be constantly mocked by his peers and was a social outcast for his difference in appearance. Little did they know that the unique trait of his was actually what could save Christmas Eve. It was the inclement weather one Christmas Eve that changed his fate. Santa Claus could barely see his path through the foggy skies. Then suddenly, when Santa Claus went to Rudolph’s home to deliver his gifts, he saw Rudolph’s bright red nose glowing in his darkened room. So Santa Claus asked Rudolph if he could guide his sleigh. Rudolph granted his request, thereafter turning from zero to hero. Since then, he has joined in Santa Claus’ herd of flying reindeer in the deliveries of gifts all over the world as a leader who lights their path with his luminous nose.

THE LIVES OF THE REINDEER

AT THE NORTH POLE

The reindeer love it in the North Pole. They are, in fact, made to tolerate cold weather, which is what makes them perfect as Santa Claus’ gift-delivering buddies. They have thick stiff hollow hairs that trap in air, keeping them well-insulated. Their air-trapping fur can also aid them in swimming, as it allows buoyance for them in water. Their noses have air warming properties that make the air they breathe warm before passing through their lungs, as well as condensing properties, converting the air into water to maintain moisture in their mucous membranes. Their feet don’t get cold either, as they have a special circulation system and anti-freeze liquid in their bone marrow made for them to withstand the cold. Also, the rim of their hooves makes for a good grip amidst the snow and ice.

The reindeer may be fond of the cold climate in the North Pole, but it’s the warm and friendly neighborhood with their fellow reindeer friends and other friends, the elves; Santa Claus; and Mrs. Claus, who are also like their family that they absolutely love. They live in a cozy barn, where the elves and sometimes, Mrs. Claus would tend to them. There, they are fed and cleaned after. They would often eat lichen, which is their favorite food. They like eating plants and mushrooms too. They are also supplied with vegetables, such as carrots and celery. Eating healthy aids them to keep strong and healthy. And sometimes, they are also given special treats of Mrs. Claus’ delicious cookies and candies.

Often times, the elves would visit the reindeer to hang out and play with them. The elves would take them out of the barn for a quick fly. They have a lot of fun flying and doing some tricks in the air with the elves. They also get to have a bit of exercise from it, which is necessary for them to be fit for travel on Christmas Eve. Moreover, the reindeer undergo extensive training to be conditioned and travel-ready for the special day. While everybody at the North Pole is busy with preparing gifts and candies for Christmas Eve, the reindeer are also busy training with the help of some elves, as well as Mrs. Claus.

When the reindeer aren’t training, they love to play with each other. They are fond of games that involve mental and physical activity. Often times, they play scavenger hunts and hide-and-seek.

HOW THEY PULL OFF THE ALL-NIGHTER

Just the thought of reindeer flying in the sky is baffling enough. Reindeer don’t normally fly. Most of all, it’s quite intriguing how they manage to deliver all those billions of gifts in just one night. Santa Claus’ reindeer aren’t really your average reindeer. In addition to their natural build that is good for kicking and striding through the cold wintry skies, the reindeer have been enhanced with the special training they have undergone and the special nutrition-packed diet they have been fed. The enhancements don’t end there, though. How else can the reindeer fly all over the world in just one night?—the answer is quite simple, Santa Claus’ reindeer are magical. It’s the magic of Christmas that allows them to travel through the Christmas Eve skies as fast as the speed of light.

Santa Claus’s reindeer each have their own distinctive personalities, but one thing that they have in common is they all want to spread some Christmas cheer. Now that you’ve gotten to know all about them, perhaps, if you’re lucky enough to actually catch them, you can identify them from their characteristics and greet them by their names.